This web site uses cookies to deliver its users personalized dynamic content. You are hereby informed that cookies are necessary for the web site's functioning and that by continuing to use this web sites, cookies will be used in cooperation with your Web browser.
I agree
Login
HrvatskihrEnglishen 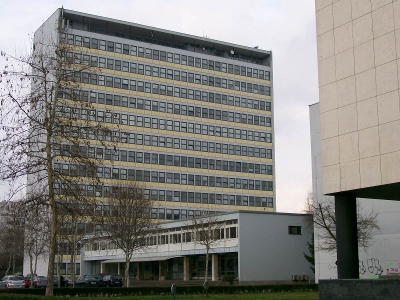 The 3rd International Workshop on Intelligent Underwater Systems and Technologies 2011, the third and final one in the triennal programme of workshops under the "Developing the Croatian Underwater Robotics Research Potential - CURE" project took place at the Faculty of Electrical Engineering and Computing, Unska 3, Zagreb, Croatia, March 27th (Tuesday).

The workshop will take place at Faculty of Electrical Engineering and Computing, Unska 3, Zagreb, Croatia, in the Grey and White halls in the conference area on March 27th (Tuesday). The workshop included lectures by experts from domestic institutions and companies, as well as by prominent lecturers from abroad. The lectures covered the current state of the art in marine technology, the requirements of the experts that can benefit from its usage and the possibilities of better interaction between them. The workshop included a round table on benefits of R&D for the Croatian economy and a presentation of LABUST equipment.

In the programme of workshops, we are committed to bringing together key players in the research & development, regulation, market placement, commercial enterprise, policy-making and non-for-profit work in marine technology, marine control systems, marine robotics, marine biology, protection and conservation of marine biological and cultural heritage, and martime security & defense.

This 2011 Field Training marks the last in the series of three annual field traings that constitute the sub-programme of The International Interdisciplinary Field Training of Marine Robotics and Applications 'Breaking the Surface', one of the two flagship Dissemination activities of the EU-funded FP7 CAPACITIES REGPOT-2008-1 project 'Developing the Croatian Underwater Robotics Research Potential - CURE'. This third and last event (within the confines of the CURE FP7-REGPOT-2008-1 project) of the series took place at the island of Murter, Middle Dalmatia region of Croatia, 18. – 24. September 2011.

In the year 2011, the technical programme of the Field Training consisted of the four programme tracks also included in the 2010 event, Marine Robotics (MAROB), Marine Biology (MARBIO), Maritime Archaeology (MARCH) and Maritime Security (MARSEC). Present at this field training, in addition to LABUST vehicles OceanServer Technologies Inc. Iver 2 AUV, Seamor Marine F-300 ROV and the VideoRay Pro II and Pro III XE GTO, was again the CNR-ISSIA's (Genoa, Italy)Charlie autonomous catamaran. The logistical aspect of the field training was changed once more based on the previous year's experiences. Dedicated groups of up to 6 participants were shuttled using RIB powerboats within dedicated time-table periods to a boat permanently positioned over the case study localities. In that way, a more hands-on approach to training could be practiced with respect to the activities in 2010, when the enitre 50-strong group of participants and lecturers was ferried to the case study localities on a large and inflexible base-ship. This year, localities much nearer the venue of the workshop part of the Field training were chosen to cut down on ferrying time and allow more participant groups to be able to take part in hands-on exercises using pieces of underwater technology. A significant part of the training, concentrating on general survey procedures and handling of certain sensors (side-scan sonar, and Charlie autonomous catamaran and its sensors) was carried out at Podvrske cove, 10 minutes walk from the hotel venue of the workshop-part of the Field Training.

The program included 2 full days of field activities and 1 day combining a classroom hands-on seminar in the use of the University of Limerick's virtual assisted / augmented reality ROV piloting software system and console. The remainder of the programme was dedicated to focused and topical 45-minute plenary-format talks by invited lecturers.

The 2nd International Workshop on Intelligent Underwater Systems and Technologies 2011, the second in the programme of three consecutive annual workshops was held in Split, Croatia on April 1st 2011. The sub-programme of annual IUST workshops is one of the two flagship Dissemination activities (the other one being International Interdisciplinary Field Trainings of Marine Robotics and Applications "Breaking the Surace 2009 - 2011") of the "Developing the Croatian Underwater Robotics Research Potential - CURE" project.

We are committed to bringing together inter-sectorial decision- and opinion-makers in the areas of advanced marine technology, marine control systems, marine robotics, marine biology, protection and conservation of marine biological and cultural heritage, and martime security & defense.

Below you can find the programme and list of presentations. Clicking on the images will take you to the more readable layout of the materials represented. 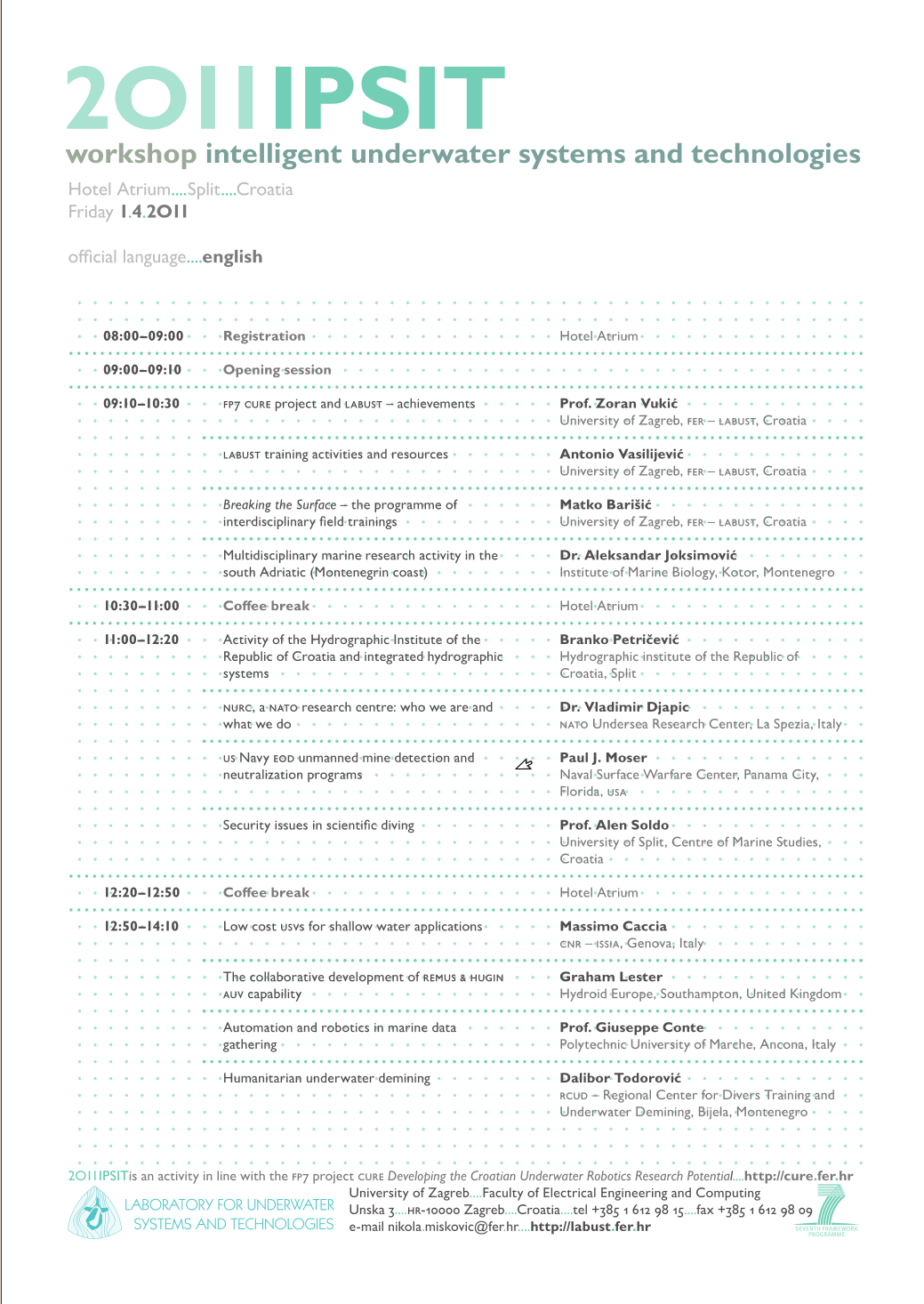 The activities of the Laboratory for Underwater Systems and Technologies were presented at the Adriatic Sea Defense and Aerospace Exhibition and Conference (ASDA) exhibition in Split from March 29th to March 31st 2011.

The visitors were able to learn about our equipment, namely the Seamor 300F remotely operated vehicle, and the Iver2 autonomous underwater vehicle procurred through the FP7 CURE project and look at examples of video footage and gathered data. Different technological solutions that were developed under the CURE project were presented, such as surveying of rivers, lakes and the undersea using robotic vehicles, presenting of georeferenced data and development of new or modification of off-the-shelf systems. Visitors were also able to learn about the CURE project.

The ASDA exhibition was attended by high ranking officials of the military, representatives of several companies from fields such as underwater construction, ship salvage operations and surveying.

This 2010 Field Training marks the continuation of the sub-programme of The International Interdisciplinary Field Training of Marine Robotics and Applications 'Breaking the Surface', one of the two flagship Dissemination activities of the EU-funded FP7 CAPACITIES REGPOT-2008-1 project 'Developing the Croatian Underwater Robotics Research Potential - CURE'. With this Training, two out of the three planned events have been realized, leaving one more event to round off the sub-programme in 2011. The second event of the series took place at the island of Murter, Middle Dalmatia region of Croatia, 27. September – 4. October 2010.

In the year 2010, the technical programme of the Field Training was extended with respect to the original, 2009 event. Supplementing the three pre-existing programme tracks of Marine Robotics (MAROB), Marine Biology (MARBIO) and Maritime Archaeology (MARCH), a new track, Maritime Security (MARSEC) was introduced. The aim of the second in the series of three planned Field Trainings was to demonstrate the applicability of a much more varied gamut of unmanned marine vehicles, including surface vehicles, represented by the CNR-ISSIA's (Genoa, Italy) Charlie autonomous catamaran, to the represented end-user disciplineactivities. Also, an accent was placed on the use of multi-vehicle systems, exemplified by the Charlie catamaran working in tandem with an autonomous pod-carrying VideoRay ROV (thus transformed into an AUV) by the NATO Undersea Research Center of La Spezia, Italy. Field-work based on human diving activities was discontinued, and more focus was placed on the operational details of performing survey and exploration activity with more than one complicated technical platform operated from the same base-ship.

The program included 3 full days of field activities, this year organized programmatically - 1. day on Wednesday, 30. Sept. 2010 was the MARBIO fieldwork day, the 2. day on Thursday, 31 Sept. 2010 was the MARCH fieldwork day, and the last, newly introduced 3. day of fieldwork, on Friday 1 Oct. 2010 was dedicated to MARSEC programme track. This fieldwork day was noted for the participation of the Croatian Navy Ship BDM-81 "Cetina", a combined minelayer / troupe-carrier / support ship, berthed at Podvrske cove on the NW side of the island of Murter for this occasion. The remainder of the fieldwork was carried out in the Kornati archipelago National Park. 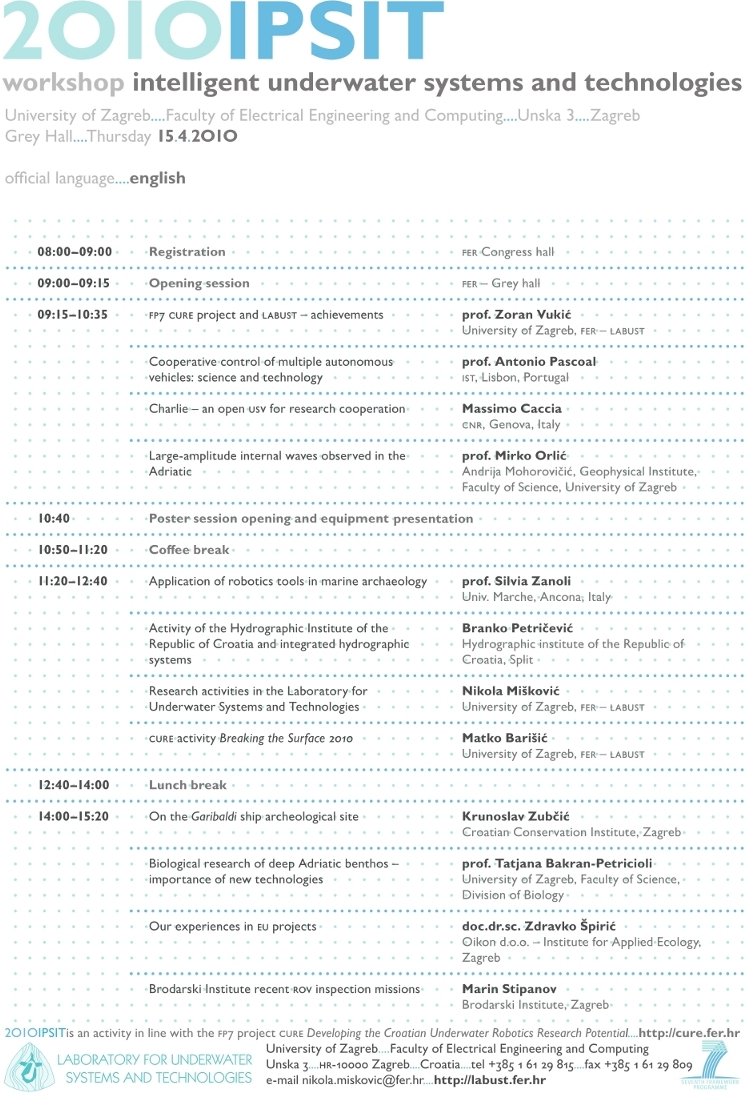 The International Interdisciplinary Field Training of Marine Robotics and Applications 'Breaking the Surface' sub-programme is one of the two flagship Dissemination activities of the EU-funded FP7 CAPACITIES REGPOT-2008-1 project 'Developing the Croatian Underwater Robotics Research Potential - CURE', scheduled to run in years 2009 through 2011. The first of the series of annual Field Trainings took place at the island of Murter, Middle Dalmatia region of Croatia, 4. – 11. October 2009.

It consisted of three program tracks: Marine Robotics (MAROB), Marine Biology (MARBIO) and Maritime Archaeology (MARCH). The aim of the first Field Training was to open perspectives and venues for interaction of marine robotics research at the Ph.D. level in currently competitive areas where advances are being made to the state of the art (localization, mapping, side-scan sonar processing, navigation sensors) with either research or professional applications in end-user disciplines, primarily marine biology and maritime archaeology.

The program included 2 full days of field activities in the Kornati archipelago National Park, including participant dives, overseen by experienced dive masters / marine biologists and maritime archaeologists and supplemented by the use of UUVs - unmanned underwater vehicles.

The MAROB module focused on the needs, in terms of the quality of navigation (localization) data and controllability of the UUVs, of the end user disciplines – marine biology and maritime archaeology surveys and research activities. Two distinct problem areas were looked into: assisted human-in-the-loop control and the implementation of the “smart ROV” paradigm aimed at the collaborative use of an ROV in the same waterspace as professional divers performing surveys; And georeferencing obtained navigation solutions and collected data-sets obtained by the use of an AUV, in order to provide a priori situational awareness (prior to human diving) of a particular geo-localized site exhibiting an elevated potential from the standpoint of either marine biology or maritime archaeology (or both).

The MARBIO module was devised as a study in which participants were to assess the characteristics of the red gorgonian (Paramuricea clavata) populations in two locations in the Kornati National Park using two different approaches, leading to two various tool-sets. A manual survey was carried out by divers using standard methods to obtain population density, size and depth distribution data. At the same pair of locations, data were also collected by a ROV in a partially automated survey. Data from both surveys were processed and results compared. The differences in the quality of data, ease and effectiveness of the field-work and necessary capabilities required to field both sets of tools and human teams (for a manual diver-performed survey and for a ROV survey) were clarified, commented on and propositions were made for inclusion of ROVs in marine biology population density surveying and research.

The MARCH module focused on two of the main problems present in archaeological research underwater. The first one is the best approach for treating the already known underwater sites lying at various depths while the second one is related to effective and fast systematic survey of areas with elevated archaeological potentials (but without certainty to the disposition of possible sites or artifacts) in order to discover new sites and plan future work. It was established that in approaching an effective and economical solution to both problems, the use of UUV carries high potential and could bring most valuable results.

No polls currently selected on this page!